When my first son became a toddler and started to play “make-believe” I realised how easy it was to use the language of virtues when playing with him.  In my series Getting Started: Raising Kids with Character I am exploring some of the initial questions I had when beginning to incorporate character education into our family life plus questions I now hear from others.  I always welcome the input of readers so that we can all learn from each other, and invite you to share your own experiences and ideas in the comments below.

In this post I’ll share a specific play scenario, but the concept can be applied to many types of play such as cooking, hospital play, dentist play, fire fighting, etc. 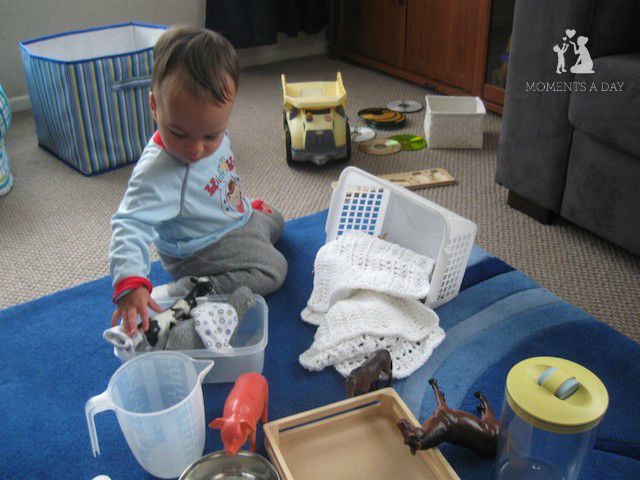 How to Build Character While Playing

On this particular occasion my oldest son was about 15 months old and we had gone around the house to find props for some farm animal toys we had.  We found a tray for food, bowl for water, containers to fill up the food/water, bottle of medicine, plastic tub to be a bath (with wash cloths), a basket (shelter to sleep under) and woven hand cloths (to use as blankets).  He had shown interest in the animals and really enjoyed getting together extra materials to set up a play scene for them.

The play was very simple.  We just fed the animals, let them drink, had them run around and make their various noises, gave them medicine, put them to sleep, etc.  I simply tried to think of ways to incorporate virtues throughout our playtime.

We ourselves could be:
-Caring when we ask the animals what they need (food, water, etc)
-Gentle when we play with the animals/put them to sleep etc
-Considerate when we think about how they feel
-Kind by taking care of the animals
-Generous by giving them food/water
-Helpful by serving their food
-Compassionate when an animal feels unwell
-Loving when we give them a cuddle

I let my son take the lead in the play of course (and also gave him plenty of time to play independently) but during the time I was actively playing with him I might ask questions such as, “Do you think Cow might be hurt?  He looks like he’s fallen down.” If he gave him some medicine or wanted to bandage his leg I might respond with, “That was very considerate of you to help when Cow didn’t feel well, you were really thinking of how he was feeling and found a way to help him. That’s called consideration.”

Simply using these phrases throughout the play introduced the language of virtues, and gave him vocabulary for actions and behaviours he saw in daily life.  I definitely recognised that over time that my son began to understand these words and really developed a deeper understanding of them because of the wide range of examples we covered during his early years.  By the time he was four or five, he understood a wide range of emotions and virtues due to the many discussions we had not only during activity time but play time as well.

Would you like more ideas about building character at home?  Check out my ebook full of practical tips – How to Build Character at Home.

Do you incorporate the language of virtues into play with your child?  How do they respond?  Please share your own examples!