My oldest son (now five and a half years old) is learning to write and read, so I have been brainstorming ideas for literacy activities that build character to include in our regular activity time.  By now he has a fairly good working knowledge of quite a few character traits, so our activities can easily include more than one trait.  These activities will simply offer us another opportunity to discuss character traits and think about how we can show them every day… while practicing important reading and writing skills as well.

Here is my checklist of activities we’re going to try over the next couple weeks – be sure to follow me on Instagram (or check the hashtag #characteredactivities) if you want to see our progress!

Note: Some of the activities might include more writing or reading than my son is ready for so I plan to simply encourage him to do as much as he feels comfortable with and help him with the rest. 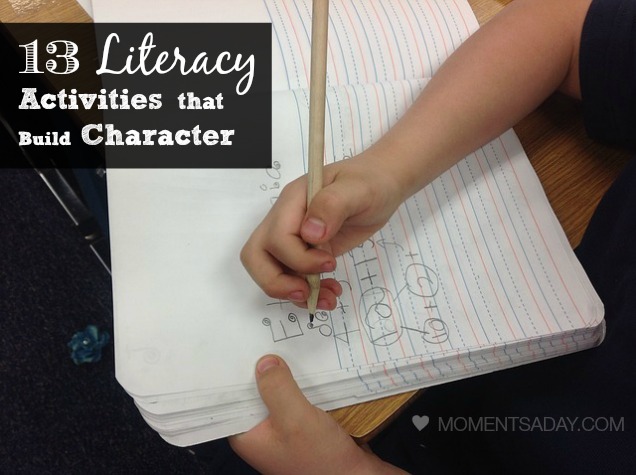 1. Copy out our family’s virtue of the month to decorate and make his own sign.  (He might sound out the letters or copy the word from our family’s sign.)

2. Create a door sign for my son’s name using large bubble letters and each time he practices a virtue, help him write the virtue inside one of the letters in a new colour.

3. Write a “thank you” card to someone who has displayed a particular character trait (such as a teacher or cousin), describing what we saw and what we learned from them.

4. Make a check-list of five ways we can practice a particular character trait in the coming week.

5. Write the letters of a virtue in a vertical line, and create a poem about the virtue using the letters to begin each line.

6. Create a “report” on what we have learned about a certain character trait, and present it to extended family or friends.

7. Write a storybook about a character who practiced the virtue.

8. Do a “Character Trait Quiz” where my son will be trying to guess which character trait he is hearing about.  I will share a short example of a child practicing a character trait (such as, “Tommy saw his mother carrying in groceries and took a bag into the kitchen for her”), and then he will write the matching character trait down on a piece of paper.  I might share three to five examples before going over the answers.

1. Write a letter with three examples of how my son has practiced his virtues, and let him try to read the sentences.  If we want to extend this activity, we can draw a picture for each sentence as well.

2. Create a treasure hunt using paper stars with a character trait written on it.  When my son finds a star, he will get to read the character trait.

3. Write character traits on pieces of paper and put them in a jar.  One person will choose a character trait and draw a small line for each letter of the trait.  They will then ask the other person to guess letters, and when they guess one correctly it can be written on the corresponding line.  After all the letters are written in, they can read the name of the character trait. (Or they can guess what it is before hand by sounding it out.)

4. Use the same jar of character traits from the activity above to take turns picking out of at the dinner table.  Read the trait then try to think of ways family members practiced it sometime that week.

5. Write individual letters on bottle tops and take turns spelling words then asking each other to read them.  I will spell out character traits that my son is a bit less familiar with to give us an opportunity to discuss new character traits.

If you are looking for more ways to add character-related discussions to your family’s routine, check out my ebook How To Build Character at Home.  This book contains lots of other ideas and printable resources for incorporating character education into everyday family life.

Would you like to join me in sharing some of these activities with your early writer/reader?  I would love you to share your experiences on Twitter or Instagram and use the hashtag #characteredactivities so I can follow along.  Feel free to leave comments below, as well.

« A Day in My Life: Mother’s Day Classic 4.5K Run
How to Include Character Education In Daily Life with Young Kids »