We had a Vuly trampoline when the kids were younger, before we left on our year-long trip around Australia, and absolutely loved it.  Look at those two boys having such a great time!  They look so little nearly six years ago, I can hardly believe it!

When we were recently offered a Vuly Ultra Trampoline to try out, the whole family gave a resounding YES! The kids had been asking for one since we moved to our forever home a couple years ago, but I wondered if they were “too old” at ages 12, 9 and 5.

How wrong I was!  After a few months of use, I am wondering why I put it off for so long. Yes the trampoline takes up space in the yard but it has such a variety of uses and is a definite favourite during play dates. I love the safety of the Vuly net (it never sits open; it just has a pocket/slide-in design) and it offers the kids a great incentive to get outdoors. 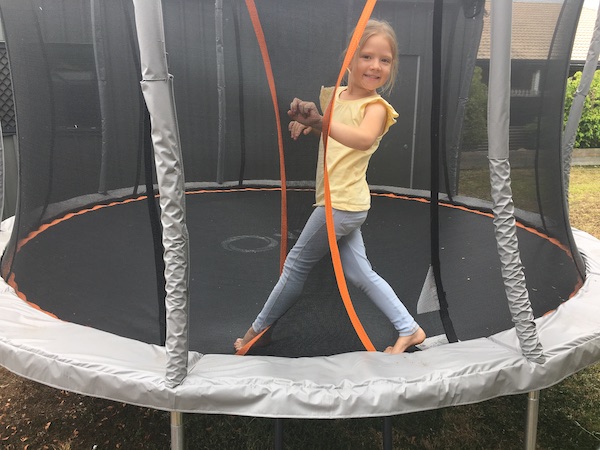 Benefits of a Trampoline for Our Family

Here are just a few bonuses I’m noticing from having a trampoline so far.

Jumping on a trampoline is great exercise, and it works muscles that wouldn’t necessarily get used doing other sports. We got the basketball set and trampoline deck which also allow for different types of movement and definitely get the heart pumping.

Using a trampoline requires balance and coordination, especially when there are multiple jumpers and games involved. Doing different jumps and flips expands the opportunities to develop muscle control as well.

When the kids are feeling antsy inside, going out for a few minutes of jumping is an easy break. The more exercise the kids get, the more settled they are when they need to resume quiet activities (cue homework time) so it’s really handy having an attractive way to release energy right outside our door.

I’ve been pleasantly surprised that all ages of guests love the trampoline, from toddlers to adults. It’s been a source of laughs and joy all around. 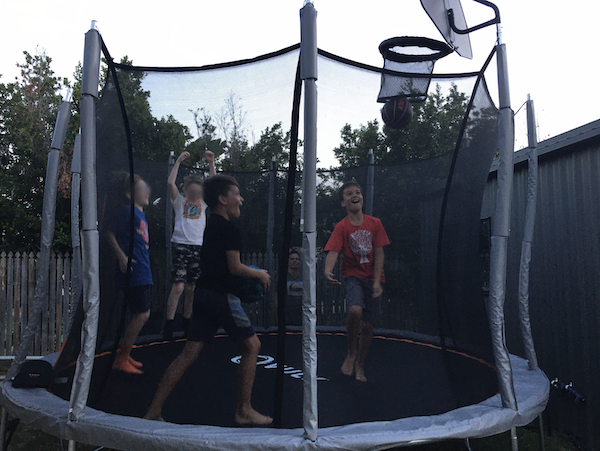 My kids love the traditional trampoline games like Poison Ball or Crack the Egg. However sometimes it can be helpful to focus on playing cooperative games, especially when multiple ages are jumping together and the older kids have an obvious advantage. Here are five games we’ve made up or adapted from other games, so there is no “winner” or “loser” and everyone can just focus on the fun of playing together!

Write the numbers 1-10 on the trampoline floor in chalk.  Someone calls out a number between 15 and 20, and the other players race to stand on the numbers so that they all add up to the chosen number. This game is best with 2 to 4 players. For example, someone calls out “12” and the players run to stand on numbers “1,” “3,” and “8” or “2,” “4,” and “6.” They may have to move around until they get the right combination of numbers. Take turns being the number caller.

The first player jumps three times as the other player counts down outloud “3, 2, 1!” as they jump. Once “3” has been called, a movement is quickly called out such as “sit” or “one leg” or “knees.” The jumper has to try to land in that position.

In this game, the goal is to make it through the whole alphabet without anyone speaking over another person. There is no specific order to this game, in fact it’s a bit more fun when there is no specified order to begin with.  One person calls out “A” when they are up in the air and then someone else calls out “B” and so forth until the whole alphabet has been said. If someone speaks over another person or if a letter is called out of order, you start at the beginning again!

Players sit around the edge of the trampoline. One player performs a crazy jump (they can name it if they want!) and the other people then take turns trying to imitate it. Everyone has a turn creating a new jump. An add on to this game after you’ve played for a while can be when favourite jumps are named, the player in the middle has to do a jump by name. For example, players on the outside call out “Crocodile Snap” and the player in the middle has to jump up with his arms chomping together like a crocodile mouth.

We would love to hear what trampoline games your family enjoys! Feel free to let us know in the comment section below. 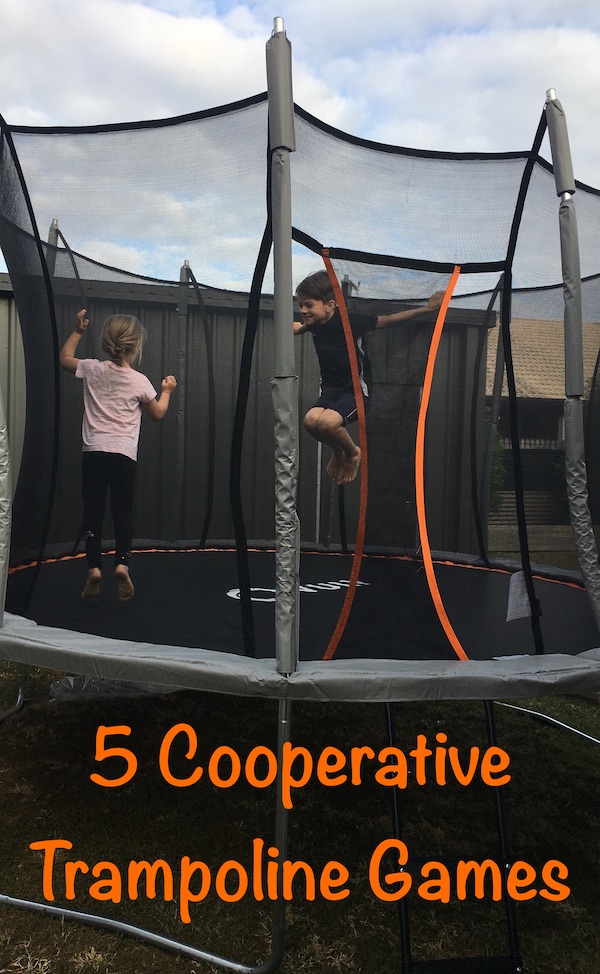 Is a Trampoline right for your family?

I’m a big believer in collecting moments, not things. I love how having a trampoline gives our family new ways to make memories. Turning on some music or a sprinkler, adding a few balls, or trying out a new trampoline game are instant hits for spending time together.

I originally chose a Vuly trampoline because I liked the style of net opening – without any zips or velcro to worry about – and the no pinch design (meaning the springs are completely outside the net enclosure and covered with a durable padded covering). There are a range of different trampolines to choose from, and I have been super impressed by the feel and quality overall of both of our Vuly trampolines. Our old Vuly is still being used by the family we passed it onto over five years ago, so it was obviously a long-lasting investment in family fun!

Vuly Play offers a range of other outdoor play equipment for kids, including swing sets and more. They have some excellent sales leading up to the holiday season, so be sure to check out their website or Facebook page for specials if you think a trampoline would be a good investment for your family.

I received a Vuly Ultra Trampoline to review. All opinions are my own. To find out more about advertisement on my website, please click here.