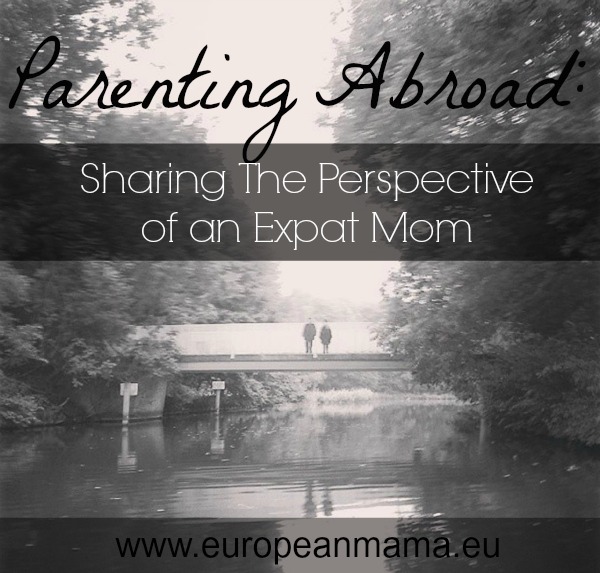 This is a guest post by Olga Mecking of European Mama.

We all know parenting is hard. There are so many decisions to be made, important decisions that could affect the life of you and your child forever. More and more families decide to raise their children abroad- and mine is one of them.

I was born and raised in Warsaw, Poland. My husband is German, and to make matters even less boring, we now live in the Netherlands where we raise our three children. For this guest post, I wanted to share my story of how it is to raise children abroad.

First of all, when you parent abroad you’re dealing with all the things parents elsewhere are also dealing with: sleep deprivation, parenting problems, temper tantrums, self-doubts, teething, sickness, conflicting advice, guilt and more.

But imagine you’re going through all that in another country.

You’re suddenly faced with new cultural norms: for example, at first I found the Dutch very rude because they don’t use many “polite” words. Also, the healthcare system and the food take a lot to get used to. Furthermore, if you’re pregnant in the Netherlands, you may find yourself shocked by medical norms (such as having to see a midwife instead of a doctor).

If you have formalities to tend to, for example in order to register a birth, get married, get a passport, or pretty much anything, you require documents from at least two countries- or in our case, from three countries- and they often have to get translated by a sworn translator, something which is both costly and time-consuming. And we, as EU citizens living in another EU-country have it easier than some!

Then, you may find that being faced with other cultural parenting practices may make you start questioning everything you knew about being a parent. Some things you considered important are not recognized where you live. You may worry that your child won’t speak your language. You’re afraid that this may alienate you from your little ones.

They are told to “integrate”, “When in Rome, do like the Romans do”, and other “helpful” things like that. Or when they’re asked why don’t they speak the majority language with their children. It is especially hard when you don’t speak the language of the country, and you’re being patronized, ridiculed, and misunderstood. Many of us feel homesick and frustrated. Not all countries have such a supportive network for expats like in the Netherlands.

Parenting abroad is not easy. But I will also the first one to tell you how much I love this expat life. Of course, a lot depends on where you live. The Netherlands are extremely child-friendly in terms of parental leave, daycare quality and the ways children are treated here.

When I arrived in the Netherlands in 2009 with a beautiful but strong-willed 6 weeks old, I went through a period when I thought I got it all wrong. Since then, I had two more children, made friends, found a job, learned a new language (the fifth in my collection), started a blog, started publishing for several websites. We bought a house. I am fine.

In fact, I am more than fine. My children are trilingual and have friends from everywhere, and show interest in languages and traveling.

If you have ever considered moving to another country, please give it a chance. It could turn your worldview upside down. It could shake your beliefs and leave you wondering who you are. But you will learn. You will tackle the challenges as they come your way, and you will grow.

If you are not living and parenting abroad, consider what other mothers are going through in your community.  Lend a hand and try to be empathetic to their experience being so far from home.  We all have a different lot in motherhood, but we can all find ways to support each other.

This post is part of the Growing from Motherhood series in which different mothers discuss difficult situations that have entered their lives and reflect on how they can grow from the challenge.  To read more articles in the series (covering gender disappointment, miscarriage, TV, and more) click here.

Olga Mecking is a Polish woman living in the Netherlands with her German husband and three children.  As a mother she does her best to raise her children to accept different languages and cultures.  She is also a blogger at European Mama, translator and trainer in intercultural communication. She was named one of the Top 25 European Mom Bloggers in 2013.Connect with Olga on: